When in Ramallah, I was lucky enough to be offered a stay at the new five-star Mövenpick which has recently opened up in the city. It was a gorgeous and opulent hotel, as you’d expect from this luxury chain, and in any other part of the world, its existence would have been unremarkable. But the fact that its opened in a city which suffers from so many economic and other restrictions is testament to the enterprise of its people, and the vision of the Mövenpick hotel chain. As the general manager, Michael Goetz, told me: “To the Palestinians this is not only a hotel it’s a monument, a symbol of a new start, a good future, economic stability, of hope and peace.” Part of the interview I did with him was published as a ‘Letter From … Ramallah’ in the Sunday Telegraph’s SEVEN magazine (scroll down the page to see it). 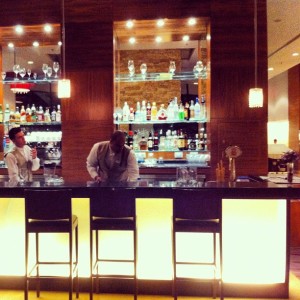 The well-stocked bar at the Mövenpick, Ramallah
© Gail Simmons