I’m a huge fan of Raynor Winn’s bestseller The Salt Path and so was very happy to be asked to review her forthcoming book The Wild Silence for the September/October edition off Resurgence & Ecologist magazine, which has just been published. The review isn’t available online, but you can read it here it is as it appears in the print copy of the magazine.

It’s a lovely surprise to have been shortlisted for the Edward Stanford Travel Writing Awards 2020. These are the main publishing industry awards for travel writing, so it’s a great honour to have been included for my first book. I’ve been travel writing for 18 years now (journalism mostly) but The Country of Larks is my first proper book. Roll on the awards ceremony on February 26th!

I was delighted to be invited to speak last weekend at the Tring Book Festival in its inaugural year, in the company of such luminaries as Rory Bremner, Jenni Murray, Chris Packham and Carol Anne Duffy. I was even more delighted to find that 120 people bothered to turn up at lunchtime on Remembrance Sunday to hear me talk about my book, The Country of Larks, which is set in the Chilterns. They were a very appreciative audience, and I met many of them afterwards when signing copies of my book. This was my first experience of appearing at a literary festival – I hope it’s not the last!

On stage at the Tring Book Festival. I’m the small figure stage right!

A few weeks back the Sunday Telegraph asked me to write a feature for their Life & Style section on “walks with meaning” : spiritual walks, heritage walks, literary walks etc. This commission was right up my street (or footpath, to be precise) as there is nothing I love more than walking, and writing about it. The editor wanted 20 such “meaningful” walks and time was short, so most of the walks were those I’ve already done, or was otherwise familiar with. But writing the piece allowed me to re-live the walks and the landscapes, and the Telegraph asked three of their staff writers test-drive (or test-walk) some of them too. The online version is linked above, but if you’re not registered with the Telegraph here’s the result in PDF format: Telegraph – Walks with Meaning.

Earlier this month my list of ‘Top 10 books about walking in Britain‘ appeared in The Guardian. There were so many books I could have mentioned, but with one exception* I only wrote about books that were wholly about Britain – which excluded such gems as Robert Macfarlane’s The Old Ways. Another self-imposed rule was that I had to have actually read the books myself, which again meant that (to my shame) some classics, such as John Bunyan’s The Pilgrim’s Progress, were left out. I also wanted to include a good few women walkers – not such an easy task, as it turned out. Guardian readers are a cultured lot, and came up with many great suggestions of their own in the comments section below the feature.

*The exception was Laurie Lee’s As I Walked Out One Midsummer Morning, which is one of my favourite all-time books. Lee walks from his Cotswold home of Slad to London, before walking the length of Spain.

Last week saw me at the Marlow Bookshop, talking about my book The Country of Larks alongside the authors of the new Slow Guide to the Chilterns. I’d never visited this bookshop before – it’s a branch of Daunts (the main shop is on Marylebone High Street in London), and recently won the 2019 Muddy Stilettos award for best bookshop in Buckinghamshire and Oxfordshire. And Marlow itself is a special place: an historically significant town on the River Thames and home for many years to Jerome K Jerome, author of the humorous classic Three Men in a Boat.

The bookshop was a lovely space to hold the event – all William Morris wallpaper and wooden bookshelves – which was well attended, with many insightful questions from the interviewer and audience. This coming Friday (5th July) I’ll be at Blackwell’s in Oxford, and the weekend after at Waterstones in Berkhamsted (15th July). Please do join me if you’re around.

April 30th saw the launch of my book, The Country of Larks, at the Chorleywood Bookshop. This independent store has been selling great books to the residents of the Chilterns for over forty years, and laid on a lovely evening for the event. A glass of wine (or two), a short speech and a pile of books to sign (see below), and it was all over. Now for a summer of readings and signings, including at the Marlow Bookshop (27th June),  Blackwell’s, Oxford, (5th July), Waterstones, Berkhamsted, (13th July) and Plant Fair in Chenies Manor (14th July). Hope you can make one of these events if you are in the area!

Last week I was invited to appear (if you can appear on a radio programme) on BBC 4’s Woman’s Hour, to discuss why women like to walk solo. Sitting alone in a small room in the BBC’s Leeds studio it felt weird talking to so many people (the audience figures are around 3.7 million) but the conversation went well, and was over in no time. Woman’s Hour has been broadcasting since 1946, yet still manages to be relevant today – and by the responses I’ve received, is listened to by quite a few men too! If you want to hear it, I’m around 10 minutes into the programme.

Hot on the heels of my book launch at the great, independent Chorleywood Bookshop on Tuesday evening (photos to follow), an interview about my book The Country of Larks is published in the current edition of Waitrose Weekend magazine. I was honoured to discover that I appear alongside literary luminaries Robert Macfarlane and Horatio Clare, two writers who I greatly admire.

The article is not online sadly (but free in store), so I’ve posted some photos of it below. You can also read some extracts from my book on the wonderful Land Lines website.

This was the week we didn’t crash out of the EU after all. It also happened to be the week my new book, The Country of Larks: A Chiltern Journey, was published. To coincide with this (less momentous) event I wrote a piece for Telegraph Travel on walking in the Chilterns before HS2 arrives. You need to register to access it for free, but it’ll be worth it – if only for the lovely photos! 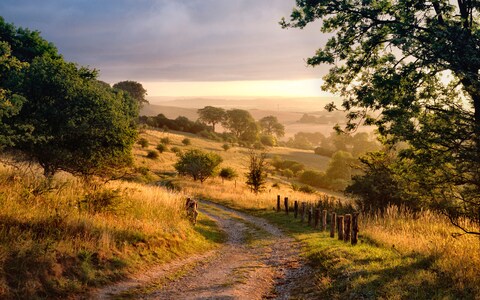 Frosted
Dusky walk this evening. We started as the sun began to set and finished walking home in the dark, our way lit by snow as bright as the moon. #winterwalks #snow #nidderdale #sunset #newyear
It’s au revoir, not goodbye.
Sunset, snow and sheep up on the moor. #wintertime #sunset #nidderdale
Given the horrible weather outside Basil has decided to have a duvet day.  #catsofinstagram #catstagram #duvetday #wishiwasacat #winter #christmastime
What I love about visiting old parish churches is seeing how much their parishioners cherish them. Many are still closed due to Covid, but St Leonard’s in South Stoke, West Sussex, let me sit in its porch and shelter from the rain. Someone had put a basket of autumn cyclamen on the windowsill - a living splash of colour against the ancient, peeling stonework. #westsussex #medieval #cyclamen #autumn #fall #england #church #history #architecturelovers
Really chuffed to get this lovely message on Instagram from a reader in the US who enjoyed my book, The Country of Larks. It’s feedback like this that make all the hard work worthwhile! Thank you @tiffstamper @bradtguides #writersofinstagram #travelwriter #naturewriting #history #memoir #rls
For ages I've needed a new head and shoulders shot for my work as my existing ones are a good few years out of date, so last week my friend Anna Watson kindly took one of me whilst on holiday here in the Yorkshire Dales. #notaselfie #portraitphotography
I took photos of this meadow behind our house earlier in the summer when it was thick with wildflowers and lapwings  . Yesterday it was  mown, the grass now lying in long corrugated rows   and drying in the August sunshine. This meadow is rented from Yorkshire Water, who don’t permit early mowing  so allowing the wildflowers to grow, insect life to flourish and the lapwings to safely nest and fledge.   And, for the farmer, the sweetest hay for winter fodder. #wildflowers #nidderdaleaonb #haymeadow #harvest #lammas #yorkshiredales #summertime
Last week I was walking in West Sussex to research my new book and stumbled upon this holloway. Named on the map Mill Lane, it’s actually part of the Roman road known as Stane Street (stone street), which ran from London to Chichester. Much of this road is now under tarmac, but unmetalled tracts still exist such as this one, worn down into a deep green tunnel by 2,000 years of footfall. #holloway #romanroad #gameofthrones #history #writersofinstagram #westsussex #middleearth #lordoftherings
I love heavy skies on a summer afternoon. That sense of drama, of an impending storm that never quite detonates but dissolves again into clear blue skies. #summerskies #summerstorms #lonetree #englishsummerfabric
I don’t like taking selfies, but today was a special day – after 3.5 months I finally had a haircut! Here are the before and after versions. #haircut #lockdownhair #bigday #selfie
Here’s a selfie taken by my father, before he became my father. It was taken in Libya when he was posted there whilst in the army. My dad is now 89 and I’ve not seen him since November due to lockdown. Hope to see him, and my mum, again soon. #fathersday
I’m doing some background reading for my new book, including this one which I bought secondhand. I always like buying used books if possible, as each has a unique history. I opened this one and a rail ticket from 1980 fell out. Over a 100 years since the book was first published (1914), over 70 years since this edition (1948) and exactly 40 years since its train journey I’m now reading it. I’m using the ticket as a bookmark. #history #greatrailjourneys #literaryclassics #timewarp #england #writersofinstagram
We went on our daily walk this afternoon to buy eggs from our local farm. Never have the buttercup meadows seemed so ... buttery . The farm we buy our eggs from (3rd photo) reminds us of Laurie Lee’s family in Cider with Rosie - a melee of barefoot children, bleating lambs, hens scuttling all over the road. Laura, the mum, always seems to have her hands full, and her husband is a farm labourer who recently cut off the top of one of his fingers in an accident with agricultural machinery. Laura always puts one blue egg into the half dozen that she sells us. #countrylife #lockdown #yorkshiredales #nidderdale #ciderwithrosie
Our neighbouring buttercup and clover meadow up close. There are lots of other wildflowers in the meadow that I don’t know the name of. The more you look, the more you see. #wildflowers #spring #nidderdaleaonb #prettyflowers🌸 #meadow
Buttercup and clover meadow behind our house yesterday, in daytime and at dusk (two photos). I saw two hares in it last night. #spring #meadow #wildflowers #yorkshiredales #nidderdale
Nidderdale on our early evening walk. I love these isolated stone field barns and stately old trees. High cloud, cold wind, sunshine. Spring comes late to these Northern hills. #nidderdale #spring #yorkshiredales #nature #walking #bluesky
If you’re looking for a lockdown read, and haven’t already read it, then I thoroughly recommend this bestselling travel/nature memoir, The Salt Path. I interviewed its author, Raynor Winn, for our MA Travel & Nature Writing students on Thursday evening and she is an absolute delight. I’m also reviewing her forthcoming book, The Wild Silence, for Resurgence magazine.  It’s a worthy sequel! @raynor.winn @penguinukbooks @bathspauni #thesaltpath #naturewriting #travelwriting #southwestcoastalpath #bestseller
I don’t know what was more fun – making wild garlic pesto, or making the movie of making wild garlic pesto! #wildgarlic #foragedfood #foraging #spring #lockdowncooking #notadomesticgoddess
Travelscribe
Blog at WordPress.com.
Loading Comments...
Comment
×